Know What to do When it Matters Most

How do we know about them? We encourage all our Canine First Responder students and CFR Instructors trained by us and their students to fill out a report form so we can recognise them for using their skills these are then shared with other instructors through a regular newsletter, some of those stories we bring you here.
She quickly ran home with Magic and called me straight away as I only live around the corner. I grabbed my first aid kit and hurried over to the house. When I arrived Magic was quietly sitting on the couch looking very sorry for herself. Her owner was distraught and emotional, so I calmed the owner down knowing that the dog could sense this and could cause Magic to be very upset too when I went to check on the wound.  I made sure I put my gloves on and used a saline solution to clean the wound by dampening some sterile gauze and gently dabbing the wound with it. All the time I was watching Magic’s reactions just in case we needed to muzzle her. Thankfully Magic was a fantastic patient as she happily let me clean her up.

Checking the wound, I noticed that most the bleeding was from a large section of fur being torn of Magic’s leg by the other dog. There was a tiny puncture wound and I checked the other side to make sure there were no puncture wounds there too, thankfully the wound was small and clean. I then checked the rest of her over for injuries and her operation site and happy she was ok I got her to get off the couch to see how she walked on the leg. I thought she might limp a little from her injury but amazingly she didn’t and was happy to put her full weight on it and walk normal.

As the wound was so small I wondered if it was worth dressing so just to be sure I phoned my CFR Instructor, who is also a Vet Nurse, to check, she agreed with me, to leave the dressing off and let it heal naturally. I called around today to check on Magic, she seemed her jolly self, the wound already healing nicely, although she is missing some fur around the site but walking fine. She has her stitches removed on Monday so I’ll ask the vet to check the attack site to be sure.

Sarah Claire Vincent - Canine First Responder 17th February 2011
I thought that choking on their own vomit would have been more likely if they were unconscious...but there you go...Just thought you would like to know that YOUR work, and what you have taught me has quite possibly saved my little one's life. That must give you a great feel good factor...and we all could do with more of those.

Jenny, (saying phew...) Bram and the rest of the crew!

Jenny Edwards CFRI 0008
Before I had chance to answer:

“Oh my god, she is having another one!”

Within 10 minutes Lucy had another four pups making six in total. The family had rescued her after finding her tied to a lamp post, their vet had told them previously she was experiencing a phantom pregnancy and not to worry.

She was caring for the four like any mother should but the two she abandoned where a worry. I advised them how to stimulate the breathing and then see if they could get Lucy to lick them clean and also to pass on her scent so they could find the nipples to feed then place them by her nipples as soon as they could to see if they would feed. Their next phone call should be to their vet for more expert advice.

Lucy took a little while but she cleaned the pups up and the phone call half an hour later told me all six pups were doing fine and where feeding and they thanked me for helping to save them.

Now it’s mid January and another follow up phone call to the family has shown mom and pups are all doing well and their vet praised “Whoever” gave you the advice as they knew what they were talking about and saved the two pups lives. High praise indeed.

Mike Jones CFRI
Lulu is attending the vets every three days for the next six weeks to have her dressings changed under sedation. In this instance the police have been very good and the case is under full investigation and I’m happy to report both owners, Lulu and myself are making a full recovery.

Lisa Stanbury, Canine First Responder, Kent.
The handler asked Rob to do something as he was aware Rob was a CFR, Rob took over the situation and waited to see if he would clear the obstruction by himself initially, when it became apparent he couldn't Rob stepped in. He asked the handler to remain calm and reassure Jack whilst he started abdominal thrusts. This was done a number of times but did not remove the blockage. Rob could hear that Jack was taking air in to his lungs but struggling to breathe and in a great deal of distress at the time.

Upon arrival at the Vets, Jack was handed directly into the Vets care who removed the blockage for his throat which was his reward ball. After removal Jack's condition deteriorated very quickly and emergency care was administered by the vet. Approximately twenty minutes after this, Jack's condition rapidly improved . A short time later and Jack returned to operational duties and has made a full recovery.

Both Jack's Handler and Rob are certain that without the training Rob had received it would have been highly likely that Jack would have lost his life.  In Rob's own words; " I am glad I had done the canine first aid course as it gave me the confidence to do something to help Prison Dog, Jack. 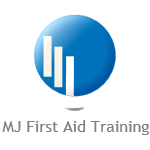